This was the first time that I went on a hike with friends. I grew up in the provinces, so I thought it was going to be an easy climb for me. Although there were plenty of holds and the trail is well-maintained, the climb was challenging because it was raining which meant the trail was muddy and slippery. The tour guide told us that it usually takes 2.5 hours to get to the summit, but judging from how slow we were going up, it might take us 4 hours. Mt. Daraitan is a straightforward 600-meter ascent that is considered a minor climb with difficulty of 4 out of 9. 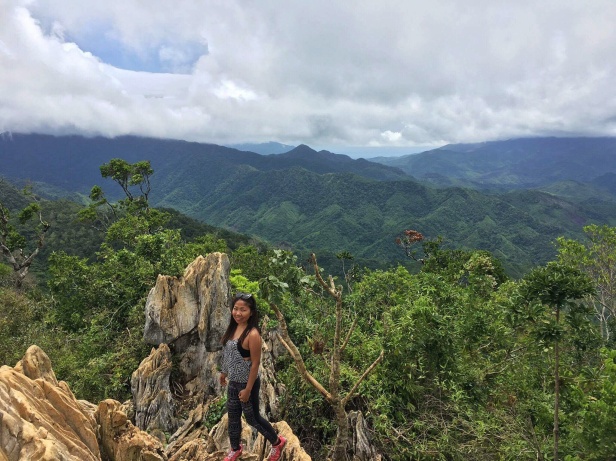 After 2.5 hours, yes 2.5 hours, we reached the summit. We were ecstatic. The view of the Sierra Madre Mountain and Rizal Province was very rewarding. We rested for a few minutes while waiting for other hikers take turns taking pictures.

Instead of returning to the barangay (village), we took the route to Tinipak River. The trail going there is very similar to the ascending trail. Tinipak River, with its beautiful limestone boulders, is a great highlight and must not be missed! This route gives the option of exploring the springs, natural pools, and caves in the area. 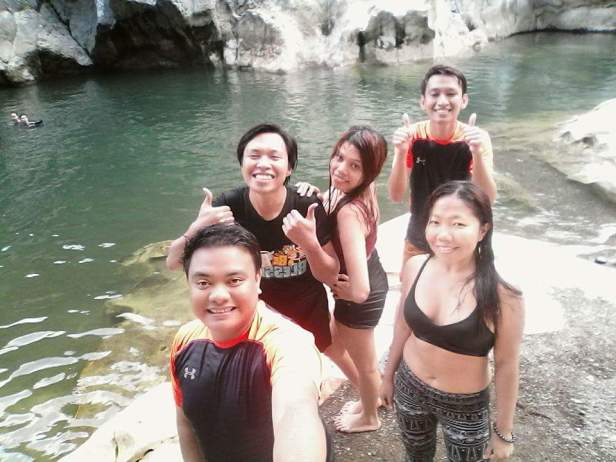 I was kinda hesitant to get inside the Maytuntong Cave because there was a long queue of people who wanted to get inside, but I’m glad that I did. The cave has a massive amount of stalactite and stalagmite that glitters like diamonds. There was water flowing under the rocks where we were walking. We then reached a small pond inside the cave. It was dark and kind of scary to swim in but we couldn’t resist the cold water.

Despite the intermittent rain that day, the water in Tinipak River was surprisingly clear. We enjoyed the place so much that we ended up leaving at 6:00 pm to go back to the barangay.

For those of you that would like to experience the beauty of Mt. Daraitan, Tinipak River, and Maytuntong Cave, heres how:

How to get there: there are 2 options for you to get there: public transportation or private vehicle. We chose the latter because it saves time and more convenient.

*Alternatively for 1, Head out to Marcos Highway and follow through the Tanay-Infanta Road.

If you can, go on a weekday instead of a weekend. We went on a weekend and it was packed. There were so many hikers and because the trail was usually just for one person at a time, it was difficult to move fast if there’s another group in front of you.

Pack light. My friend asked the tour guide to take her backpack because it was heavy for her to carry to the top. She has to pay extra, of course.

Bring lots of water. The tour guide required us to bring 2 liters of water. The best thing about hiking on a weekend is that there are some vendors selling bottled water up the mountain.

Wear hiking gloves. You’ll find yourself holding on to branches/trunks/muddy rocks for support. If you don’t want to get your hands dirty or cut them, gloves are a must.

Wear good footwear for hiking. This is for your safety. On our way down, a woman tripped while trying to balance herself in the slippery trail. She was wearing rubber slippers/flipflops and you could see that she was in pain while slowly going down.

Prepare to get down and dirty. Especially when it is raining, the trail is very muddy.

Rent a Headlight or bring your own flashlight. It is handy when entering the cave rather than using the lights of your phone where you can risk dropping and damaging it.

Perfect weather for a walk. Gone are the days when I have to stop every 5 seconds to take a selfie whenever I am in a new place.
Earth Day!
Always bitchin’ about beachin’... 🍦
Natural habitat. 🌴☀️ 🌊
Home. Someday soon. 💚
2021 ✨

This is Coron, Palawan